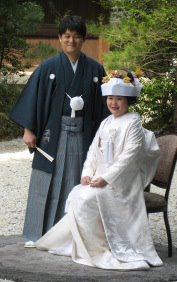 The Meiji Shrine and Harajuku Station are right next to each other, which is like seating a shamisen musician beside a punk rocker.

While at the shrine, we witnessed a wedding party having their photos taken. A lot of time was taken making sure the bride’s kimono was exactly right, every crease, every fold, every angle.

Unlike in Chinese weddings, in Japanese weddings it’s apparently all right for the bride to wear white. (In Chinese culture the color white symbolizes death, though most modern Chinese are okay with a western white wedding dress, as long as the chipao is red.)

Of course we completely infiltrated the wedding party’s privacy and got too close to take our own pictures. We weren’t the only ones though! It was only after we finished ours that the mothers of the bride and groom noticed, and started staring suspiciously all around.

We also had the chance to see an engaged couple get their picture taken. I’m guessing the couple is just engaged and not married because of the color of the kimono. 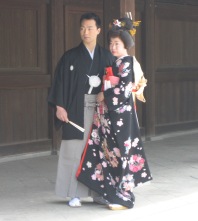 To go from the peacefulness of Meiji Shrine to Harajuku Station was quite a change. I couldn’t stop taking pictures of the girls – and some boys, a couple of them in drag – and so here are just a few. 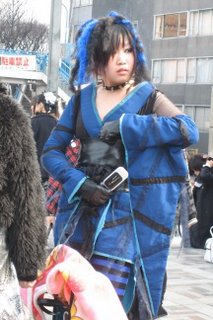 I call this girl in blue Miss Bunny because a moment ago she had a pink “Miss Bunny” blanket draped over her shoulders. It was quite chilly on this day and most of the girls seemed to be freezing.

Our friend Motoko told us Sunday is the best day to visit Harajuku Station, presumably because the girls are out of school.

We wondered if they always dressed like this, or just during their “off time.” My guess was that after a week of wearing school uniforms and having to conform to society, this was their chance to break from the crowd – though a lot of them looked like each other.

We also presumed that their clothes were mostly handmade, but then later on Takeshita Dori, or Shopping Street, we saw several of their dresses hanging in the storewindows. Harajuku style off the rack.

This girl in red is of the babydoll variety. She was very eager to have her picture taken, posing solo or with tourists. 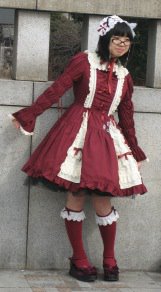 Some were shy, or acted so, like Sullen Girl below.

Maybe this is what the Harajuku girls look like during the week. 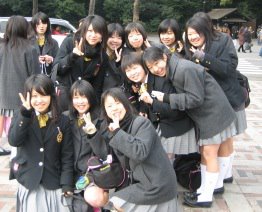 At first I had bit of a hard time trying to tell these girls I wanted to take their picture. They thought I wanted them to take my picture, and when they finally understood, they asked why I wanted their photo, and rightfully so.

“Because I think you’re cute!” I told them, after which they very willingly obliged.

This entry was posted on Thursday, February 23rd, 2006 at 1:20 pm and is filed under tokyo, travel. You can follow any comments to this entry through the RSS 2.0 feed. Both comments and pings are currently closed.