This is the lovely buckwheat tea we had our first night at dinner. 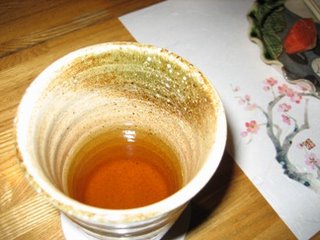 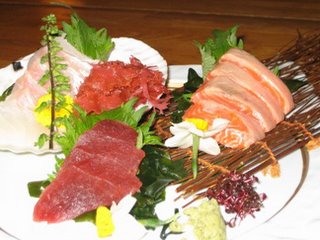 The tempura, which included some mysterious vegetables, one of which looked like broccoli but was very bitter, and another which looked almost like a potato but was firmer and almost gingery in flavor. 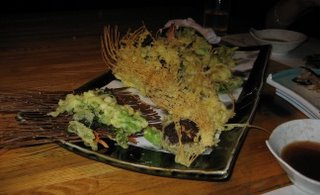 Included in our conveyer belt sushi spread were these baby eels. 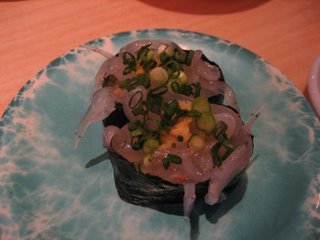 I found that they didn’t have much of a flavor, but they did indeed have beady little eyes that kept staring at me as I ate them.

Our round of okonomiyaki in Kamakura. 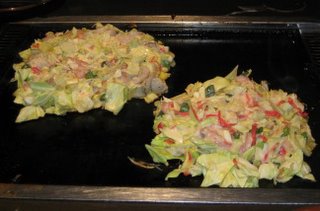 And my melon soda. 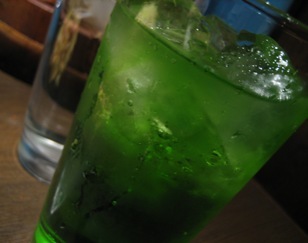 Saw lots of cool stuff from the street as well, like storewindow food displays.

And whatever this is.

Also, vending machines were everywhere, and dispensed not only soda, water, and juice. . .

I had an excellent hot espresso in a can in Yanaka on our last day.

But not everything we ate in Japan was good, like this fried cheese/rice ball we got at McDonald’s.

The Japanese do NOT know how to do cheese. Blech and double blech.

But everyone was very nice, including this silly guy.

This entry was posted on Thursday, February 23rd, 2006 at 3:13 pm and is filed under food, tokyo, travel. You can follow any comments to this entry through the RSS 2.0 feed. Both comments and pings are currently closed.