I’ve emerged from my cave and finally taken notice of the Nike + iPod Sport Kit. It’s the recent ad that’s gotten me, featuring a guy running on a treadmill against a movie screen to this catchy tune, which has a pretty cool video involving, yes, treadmills (one take, people! it’s done in one take).

The thing about the sport kit is that I’d have to buy a Nano. I already have a Mini, but I’ve had it for about 2 years now, and the battery’s wearing out. Like I’ll charge it all day and it’ll last only about two hours, while when I first got it, it’d last up to 5 or 6. 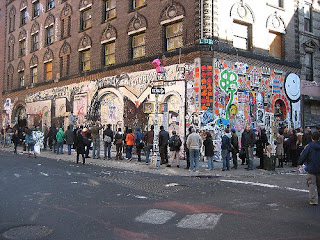 In other news, on Saturday I went to the 11 Spring Street open house. For those who don’t know, 11 Spring St. has long been a sort of graffiti landmark. Artists have come from around the world to make their mark.

To honor its place in the artworld and as a part of New York history, the owners invited street artists to do up the inside of the building before beginning renovations. Two months later they opened the doors to the public, hence the open house this past weekend. Renovations began today.

Hours were from 11 to 5, and I got there at about 11:30. The line went around three square blocks. Crazy! I waited for about an hour, taking pictures all the while. 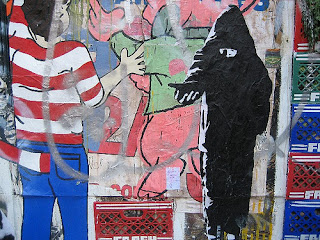 I didn’t mind the wait except that it was colder than I expected so after a while I started to freeze, and then I had to pee. Oh well.

Inside, needless to say, was pretty darned cool too. A few of my favorites: 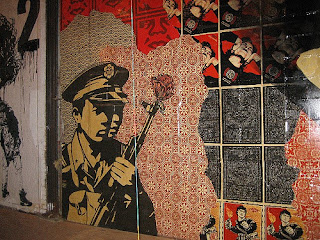 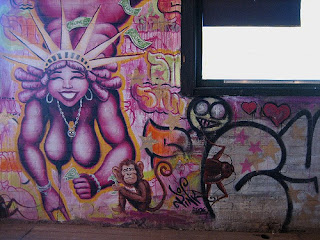 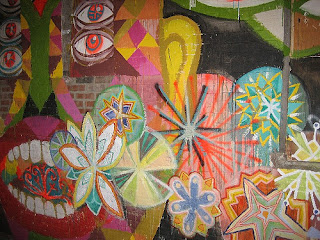 Afterwards, I stopped in Rice to Riches to use the bathroom. I’ve yet to actually try the rice pudding there. I was starving but resisted as that blast of sugar would have f’d me up. Instead I went up to Astor Place and had ramen and boba tea at Saint’s Alp. Then Whole Foods for a couple of Christmas items.

It was about 3:30 when I got home. I had left the house at 10 and was exhausted for some reason, but a good kind of exhausted. Later that night I met my mom at the Grand Central JFK bus drop-off, where we picked up the free shuttle to Penn Station. I got her on the very crowded train and took off.

Yesterday was a hermit day. I stayed in and cleaned like crazy. It was worth it. I love how my floors shine afterwards. I also rearranged and got rid of some books that I knew I’d never read or just didn’t want, ie, DK’s castoffs that he had given me. As the Gilmore Girls say:

Rory: “You know what it means when a man gives you a book.”
Lorelai: “That he’s already read it?”
Rory: “Yup.”

Should be quiet this week.

This entry was posted on Monday, December 18th, 2006 at 9:50 am and is filed under food, holidays, new york, photography, weekends. You can follow any comments to this entry through the RSS 2.0 feed. Both comments and pings are currently closed.