The desk is set up 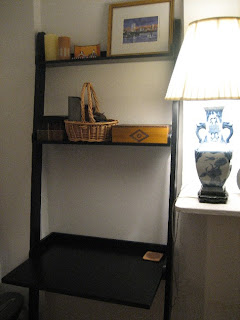 Enough with the desk already, right? Too bad.

It arrived Friday night at 7:15 so I’m glad I rushed through my workout and got home in time. The boxes were smaller and lighter than I was expecting – the guy was able to carry both at once up to my apartment – so I might have been able to bring them home myself. Oh well.

Before tackling the desk, I first brought my old bookcase downstairs, almost klling myself a couple of times, to leave on the sidwalk. By the next morning it was gone.

The desk was pretty easy to put together, but I was dismayed to find that I’d have to drill a wall mount. Not that I’ve never drilled anything before – my window blinds, towel rack, tie rack appropriated as a necklace holder – but I always find that kind of work a little daunting at first. Of course when I actually did it, it was fine. Not perfect but secure enough.

Now I want to get a matching bookcase. There’s a place in my bedroom that would be perfect for it.

In other news, yesterday I had lunch with SB, who was without child. Pork cutlet bento box at Go Sushi – yum! Then we hit a bookstore. It was so cold out, we didn’t last much longer after that. She went home to take a nap while I grabbed a large mocha joe – not as good as the ones I had in L.A. – and went to my place to continue reorganizing my stuff.

That night I went to YP’s birthday party. I met some interesting new people, had a tasty pomegranate cocktail, and some delicious Sweet and Salty Chocolate Cake. It may sound weird but the subtly salty flavor really made the chocolate pop. YP and his best friend from home schlepped all the way out to Red Hook, Brooklyn to pick it up.

Afterwards some of us went dancing. Unfortunately we weren’t able to check our bags and coats – coatcheck was closed, which we found out only after half an hour of waiting – and so we weren’t able to dance. But we had a round of drinks and watched the crowd a little while before heading back out into the cold.

One pomegranate cocktail + one gin and tonic = Drunk Anna May

I know: I’m a lightweight.

Being drunk made me think taking the subway at 1 in the morning would be okay. It wasn’t dangerous but not many trains were running. I actually have no idea how long I waited, having lost all sense of time. It was probably something like 10 minutes before I got fed up and grabbed a cab.

One pomegranate cocktail + one gin and tonic = Hungover Anna May

I was pretty worn out today. At noon for some reason I craved McDonald’s like crazy, and ended up pigging out on a fish filet, McNuggets, and fries. This afternoon I took a short nap and felt much better afterwards. Didn’t clean at all. Will have to during the week.

This entry was posted on Sunday, January 21st, 2007 at 4:10 pm and is filed under friends, weekends. You can follow any comments to this entry through the RSS 2.0 feed. Both comments and pings are currently closed.