Number of hours it should theoretically take to drive from Los Angeles to Las Vegas: 4.3

Number of hours one will inevitably stuck in traffic because people with broken down cars don’t know how to properly pull off to the side of the road: 1.2

Percentage of scenery on the drive from L.A. to Las Vegas that is barren desert wasteland: 90

Number of yucca trees in attendance: 5,235

Number of In-N-Out Burgers along the way: 2

Number of phone calls made to mother, uncle, and cousin regarding hotel check-in, after which we still won’t have a clear answer: 4

Number of times mother says, “Everyone’s at the buffet”: 7

Number of minutes we realize it shouldn’t take so long for our uncle to walk from the buffet to hotel check-in: 20

Number of phone calls to find out that mother, uncle, and uncle’s family aren’t in the buffet but on their way from the airport: 1 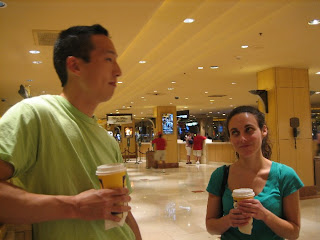 Ounces of coffee ingested collectively by this point: 72 (24 per person)

Number of times cousin and I will be grossed out when a random lady implies that we’re hooking up when I say, “We’ll meet you in your room”: 1

Number of changes of clothes I brought for a weekend in Vegas: 3

Number of buffets attended before getting sick of buffet: 1

Average temperature on a typical June evening in Las Vegas: 114 F (kidding, more like upper 80s, but still felt like an oven)

Number of minutes one can spend outside during the day before one feels one will burst into flames: .5

Number of “ones” mentioned in the sentence above: 3

Minimum degree of SPF protection one needs to keep skin from burning to a crisp: 50

Number of sakes it takes to get me bright red: .75

Number of minutes between uncle saying, “We’ll be there soon,” and actual arrival: 30

Ratio between amount of exertion it takes to walk from Bally’s to the Mirage at noon on a typical June day in Las Vegas (see average tempature above) and the quality of the buffet at the Mirage: 2:1

Number of people who will almost faint upon the walk back from the Mirage to Bally’s: 2

Amount of money lost by me on video poker: $10

Amount of money spent by me on the rip-off of a gym at Bally’s: $22

Number of bottles of water and pieces of fruit pilfered by me from said rip-off of a gym: 4, 2

Number of jokes my aunt will tell that involves the very loud pronouncement, “Woof! woof!”: 1

Number of times she’ll tell it within a 5-minute span: 2

Number of languages she’ll use to tell it: 2

Times my mother gets the joke: .3

Number of jokes my aunt will tell that involves breasts, penises, camels, and elephants: 1

Average duration of time my cousins and I will be mortified: 44.6 years

Number of combinations of family members the Won’t clan can devise for group pictures: 136 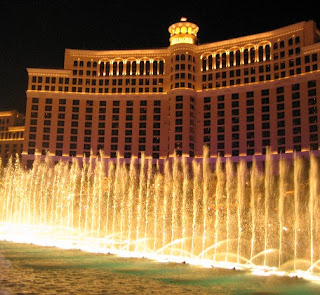 Coolness factor on a scale of 1 to 10 of the fountain show at Bellagio: 10

Cheesiness factor of Neptune/Fire and Ice fountain show at Caesar’s: 10 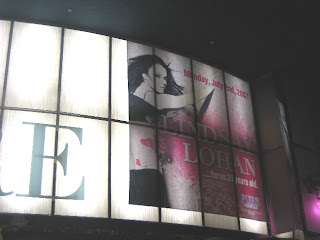 Number of mothers, aunts, and uncles it takes to come to a decision about where to eat for brunch on the last day: 0

Number of neices named Anna May: 1

Number of items I will break in one minute on the drive back from Las Vegas to L.A.: 2 (my sunglasses and my iPod holder)

Number of times I’ll return to Las Vegas in the summer: 0

This entry was posted on Tuesday, June 19th, 2007 at 11:36 am and is filed under rant and/or rave, travel. You can follow any comments to this entry through the RSS 2.0 feed. Both comments and pings are currently closed.