Needless to say I could barely pay attention in class last night and spent the whole time checking the numbers on the NY Times’ trusty map. Well, “trusty” cuz the numbers changed like crazy. At one point Obama had 92% of the vote in Alamaba of all places, and the next minute, he was down to below 50%.

Still, we were both pessimistic. MB kept saying, “I hate to say it, but I think McCain will win.” I mean, it happened with Al Gore, why not now? I didn’t like hearing that, but I also didn’t want to start celebrating too soon.

At home we took a break from the election and watched an old Burn Notice on Hulu. By the time that was over, I was totally sleepy. “I just want to check the news one more time,” I said, and we turned it on to find John McCain giving his concession speech.

His speech was actually quite good. I especially loved it when he held up his hands with a STFU expression when people started booing Obama.

The live stream was driving us crazy because it kept stopping and starting. So we decided to head out – it was almost midnight at this point – and find a place with a TV. The bookstore near us was closed, but they let us come in and watch on their big screen that they use for movies.

There were a bunch of people there, I think mostly affiliated with the store. It was great to watch Obama’s speech with other people, but a lot of them were young hipsters who refused to let go of their cool attitude for even 20 minutes, let alone a whole night. They kept snickering and making wise ass comments. Oh yes, you’re so very cool and above it all.

As for me, I decided for one night I’d feel hopeful and optimistic (after Obama was actually elected of course). Today or tomorrow or the next day, I’ll be cynical and critical again. It’s bound to happen: Obama’s already flip flopped on several issues, and there’s a chance he’ll be just another politician.

But the fact is: American has voted a black man into the presidency. Just 50 years ago, Obama wouldn’t have been able to eat in the same restaurant as whites, and now he is running this country. All little kids can now say, “I want to be president someday,” and actually have a chance at it.

One of my favorite pictures from the campaign trail: 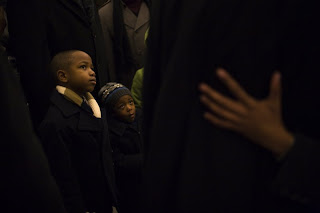 From photojournalist Callie Shell: “These two boys waited as a long line of adults greeted Senator Obama before a rally on Martin Luther King Day in Columbia, S.C. They never took their eyes off of him. Their grandmother told me, ‘Our young men have waited a long time to have someone to look up to, to make them believe Dr. King’s words can be true for them.’ Jan. 21, 2008.”

This entry was posted on Wednesday, November 5th, 2008 at 7:51 am and is filed under news. You can follow any comments to this entry through the RSS 2.0 feed. Both comments and pings are currently closed.