A shopping kind of weekend

This weekend was quiet and relaxing. Friday night we attempted to see Milk, but got to the theater early and decided to see From Within instead, part of the After Dark Horrorfest. Bit mistake. Cheesy and melodromatic. Only moderately entertaining.

Today is MB’s first day back at music school so he spent a lot of the weekend studying and practicing. While he was doing that and to take a break from writing (cuz I don’t do that enough), I went up to Lord & Taylor and bought a few things. It was a bitch to get up there what with the snow, but I needed to get out of the house.
On the way back, I grabbed the subway but power was out right before my stop so I had to get out and walk. It was kind of a schlep but I needed the exercise, and the streets were pretty with fresh snow. Also, on my way, I popped into the Tumi store to see if this bag I’ve had my eye on since the fall was on sale – and it was! 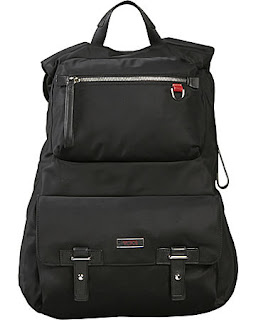 They only had the gray one, which was marked down to $149 from $345!!! I mean, how ridiculous is that? Plus I’ve decided I really love the color, which is more like a matted silver.

The size is perfect. The backpack I was using before was huge, and my stuff would get lost inside. I have a million shoulder totes, but this year for some reason they have been hurting my neck and shoulder. This Tumi one is small enough to be like a purse, but big enough for a notebook for school. Plus the material is light and flexible.

This week at work I’m in our NJ office for a couple of days. I could have taken the train down Wednesday morning, but it takes about 2 hours to get there, and the meeting starts at 9. So I booked my hotel starting Tuesday night so I can take my time getting there. I’m going to try and get up early Wednesday and Thursday to hit the hotel gym before the meeting.

Then this weekend is a three-day, woohoo! YP and I have our first monthly photo outing of 2009 on Saturday, and then I have class on Sunday. It’s not till 1 so I can totally sleep in.

I can’t believe next weekend is already Chinese New Year. The year of the ox. I don’t know if we’ll go to my parents’ but we’ll definitely eat dumplings.

This entry was posted on Monday, January 12th, 2009 at 7:57 am and is filed under weekends, work, writing. You can follow any comments to this entry through the RSS 2.0 feed. Both comments and pings are currently closed.