Last weekend I shot a bunch of video for one of my school projects, including footage of Coney Island. MB had a bunch of praciticing and work to do so he stayed behind, but YP was able to join me.
We headed out pretty early, around 10, luckily for us since it took a year to get out there, especially with the F running on some other line. It was hot in the city but chilly out by the water. The season has just started so a lot of booths and rides were still being set up, and there weren’t that many people out at that relatively early hour.
Except for all the freaks. It was very strange – everyone was either inbred-looking or obese, which in a way was good because it turned off my appetite for all the otherwise good-smelling fried food.
My fave pic from our expedition: 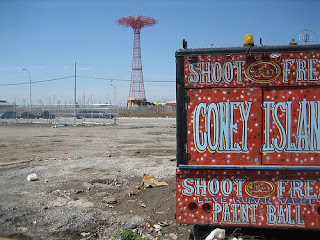 Aside from shooting video and taking pics, we actually rode the Wonder Wheel, which was surprisingly scary. I may put up some video footage. It’s not too exciting, but I’m so proud that I was able to figure out iMovie and crop clips, take out the audio, and add different audio. It was fun.
On Friday MB was supposed to fly out to Prague, but he missed his flight. The airline was screwed up, but he also left pretty late. He was able to get on another flight for Saturday and made his flight. Yay!
So we were able to see Wolverine Friday night. It wasn’t bad – some good action sequences, but the plot was pretty stupid. Could have been a lot better.
Saturday I saw a couple of friends from college whom I haven’t seen in ages. We had dim sum (which was NASTY by the way, won’t be going to that restaurant again) and walked around Chinatown. It’s funny how everyone seems the same though so much has changed. For instance, IS has THREE kids. I remember when we used to sit in the hallway of our dorm gabbing for hours. Now she’s a mom. But at the same time, she seems perfectly natural as a mother.
The rest of the weekend was all about schoolwork. Got a lot done, including my library profile and reading cards for Collection Develpment on Sunday; my library organization paper for today; the little film for Thursday’s class (must have redone the voiceover 5 billion times); and a draft of another informal paper for Thrusday. Need to edit that, then finish the write-up for the corp speak project, and throw together a presentation for the same. The bulk of my work is definitely for that Thursday class.
Next Sunday, Collection Development final, which shouldn’t be bad, and on Monday, Management presentation. Then I’m done till London! Can’t wait.

This entry was posted on Monday, May 4th, 2009 at 7:58 am and is filed under food, friends, library, photography. You can follow any comments to this entry through the RSS 2.0 feed. Both comments and pings are currently closed.