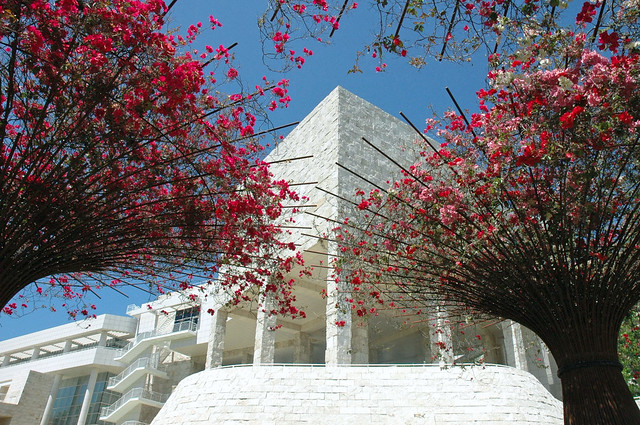 Early last month I decided to take a last minute trip to L.A. One friend was going for business while another was going for fun. Plus my brother said it was good timing for him and his wife. On top of all that, I managed to find a cheap flight.

As on all my trips, I saw a buttload of museums.

A newly opened contemporary art museum and already booked months in advance. But my brother knew about its standby line, in which you show up, wait in line, and hope you can get in.

We got there about half an hour before it opened, and the line already went down the block. However, the museum workers did a good job of letting us know how long the wait would be. They said an hour, and that’s exactly what it was. It also helped that it was beautiful out.

The space and art were fun. Lots of Jeff Koons, Jackson Pollock, and other ones I can’t name. :P I wanted to see the Infinity Mirrored Room, but there was a waiting list. Not only that, there was a line for the list. I would definitely go back.

I had mentioned wanting to see the George Takei exhibit. Turns out it was walking distance from the Broad so off we went.

I really enjoyed it. I was surprised to learn it was curated by Jeff Yang. Surprised because you don’t usually see writers curating museum exhibits. That may be part of the reason I liked it. It told a cohesive story, taking highlights from Takei’s life and juxtaposing them against points in American history, from his being interned with his family at age 5, to the racism he faced trying to make it in Hollywood as an Asian American actor, to Star Trek, to coming out, to getting married.

I always enjoy going to LACMA, especially since my brother is a member and can bring a guest for free. Their special exhibit was Picasso & Rivera, which examines the paintings, etchings, and watercolors from the contemporaries and compared them to the classic works (Greek for Picasso, Mexican for Rivera) that inspired them.

My friends and I spent a good three hours here, but I could have stayed for longer. I focused on the special exhibit, Bouchardon, which was fairly interesting, and the garden. I started to look at the Concrete Poetry exhibit, but it wasn’t that exciting to me. Maybe if I had had more time. I felt like looking at some paintings so I went over to that building (which was hard to find for me) and got in some Rembrandt, Dutch still lifes, and French Impressionists.

That’s not all! I did other stuff besides visit museums (if you can believe it). That’s coming up next.

This entry was posted on Thursday, March 30th, 2017 at 7:41 am and is filed under los angeles, museums, travel. You can follow any comments to this entry through the RSS 2.0 feed. Both comments and pings are currently closed.