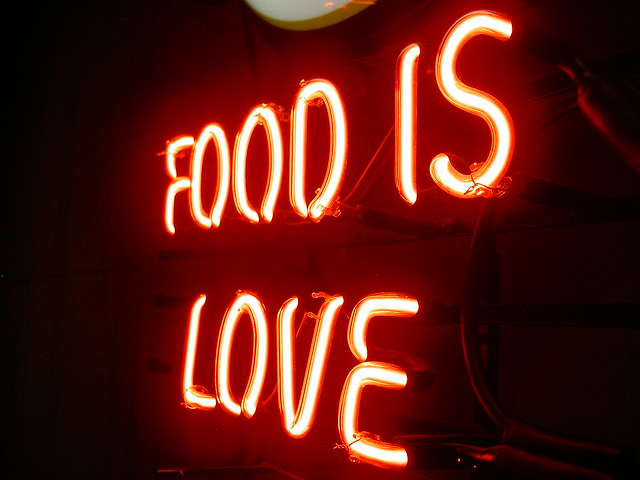 My good friend Ellen was in town for Passover, which happened to be right before my birthday so I took advantage and had a fun-filled pre-birthday weekend, which, as always, involved a lot of eating, drinking, and museum-ing. First up, the eats.

Ellen had spent the day with her dad and was dropping him off at Penn Station so we met at Pennsy, the newish food court that’s in what used to be Borders.

While it’s certainly nicer than anything in Penn Station (although now there’s a Pret a Manger and a Magnolia Bakery), it still leaves a lot to be desired with only half a dozen choices.

I had an overpriced, mediocre cocktail (it should take longer than 30 seconds to mix one) and we shared yummy mac ‘n cheese appetizer from Pat LaFrieda.

Next we walked to nearby Koreatown. Shanghai Mong is one of my favorite places for jajangmyeon. One order will set you back just $8.99, but we ended up spending a lot more than that.

Perhaps we got a bit too much food. We got the grilled jajangmyeon, the sweet and sour pork, and the dukbokki. We probably should have gotten just two out of those three dishes, although the leftover pork made a good snack over the next couple of days.

We’ve been talking about going to Tim Ho Wan for a while, and we finally made it bright and early the Friday before Easter.

Which seems to have been the right time to go. This dim sum place is the cheapest Michelin-starred restaurant there is so there’s always a massive line. But our wait wasn’t bad. It opened at 10 and we got there about 9:40. While the vestibule was packed, we were the first people on line outside (and I was ferocious to anyone who tried to get in front of us). As soon as the doors opened, we were able to get a table.

Tim Ho Wan doesn’t have carts like other dim sum restaurants. You place your order and they bring it to you. Maybe that’s why it feels less chaotic. And the food certainly lives up to the hype. We got the roast pork buns, turnip cakes, shrimp dumplings, sticky rice, and some other dumplings.

My favorites were the roast pork buns:

I loved the savory meat in contrast with the slightly sweet pineapple outside. I also loved the turnip cakes, which were far more turnip than cake. But everything else was excellent too.

I would totally go again, even with the wait.

By the name of this place, you’d have no idea that it’s Japanese. A find by our friend, Aki, the amateur concierge, it started in Williamsburg and opened a second location more recently in what they call Hell’s Kitchen, but let’s face it is Times Square.

They do a kind of modern take on onigiri, bento boxes, and dora-yaki. What do balls have to do with it? Their specialty are their meatballs, which were delicious.

The night we came back from a day trip to Beacon (more on that later), we had a late dinner at Momosan (at Aki’s suggestion) near Grand Central.

The decor is very hip, but the prices are reasonable. I got the tonkotsu ramen for $11:

I thought they forgot my egg and without question they brought me one. Then I found my original egg under the seaweed. Oops! Oh well, a free egg with my birthday noodles.

The only downside was that our waitress was pretty snooty (not the one who brought my extra egg). There goes your 20% tip.

Another Aki find. This tapas place isn’t too far from where I live. Plus! They have $3 beer and sangria during happy hour. We weren’t very hungry so a few tapas plates between the three of us was perfect. We got ham croquettes, a bacon and date thingie, and some kind of tostas, I forget which.

Next up: our trip to Beacon.

This entry was posted on Friday, April 21st, 2017 at 7:09 am and is filed under food, friends, new york, new york adventures. You can follow any comments to this entry through the RSS 2.0 feed. Both comments and pings are currently closed.