Neck and neck with my obsession with museums when I travel is that with food. Maybe especially food at museums.

It all started with my best high school buddy. We had traveled together in China, but it was in Amsterdam that we started hitting the museum cafe before the actual museum. I remember waiting in line for the Rijksmuseum to open, dying for coffee, and making a beeline for the cafeteria. Soon it became a tradition.

Nowadays the museum cafe isn’t always first, but I usually end up there at some point.

During our first visit to Palais de Tokyo, we just had some drinks. I was craving an apple juice, and struggled with asking for one. Luckily the girl behind the counter spoke a little English and was able to explain that the drink was almond and apple, as well as carbonated.

“Carbonated,” she should have said. It was extremely subtle. The almond was less so but it was delicious all the same.

We returned to Palais de Tokyo because we were in the area and to partake of their photo booth. This time we had lunch. I was looking forward to a jambon beurre (not that I hadn’t had a few already). But they didn’t have any so I settled for tuna.

Which was really good. That and British salt and vinegar chips, and a fantastic vanilla panna cotta made for a quick yet yummy meal.

Next, the Musee D’Orsay. Last time when we went, I didn’t enjoy my sandwich. The bread sucked, surprisingly. This time we had already eaten so I just got a chocolate-caramel brownie. Holy cow. It was almost like flourless chocolate cake. Delicious.

The only museums I didn’t eat at were the Cartier Foundation (I wasn’t hungry for a change) and the  Musée Jacquemart-André. The restaurant was more upscale than I wanted. So instead we went to…

…this place. We had passed it on the way to the museum, and we figured since we might not be getting a lot of fresh vegetables during our stay, it would be a good choice.

And it was! It was a bit like Chop’t only without the chopping. I got an Asian type salad with tuna, which was tasty and filling. My only disappointment was my “dessert.” I got a fromage blanc, which was definitely not dessert-like, at least not to me.

Another sort of random place we ate at was a cafe not far from the Catacombs. A couple of my friend’s friends happened to be in town, and after a visit to the boney undergrounds, we stopped for an impromptu, al fresco lunch.

I had a little arugula salad and the “hamburger,” which came without a bun and lots of fries. So good. Complimentary were little glasses of red wine mixed with soda (at least I think that’s what it was). Delicious all around and lovely to eat outside and enjoy the day.

One of the few vegetarian places in Paris, Soya is one of our favorite haunts. Vegetarian, you might be thinking? But I’m a total carnivore. That’s true, but my friend isn’t, and the food at Soya is really good.

We were introduced to it by a friend of a friend during our first visit. At that time we had a very angry waitress who practically threw a water bottle at us. Since then the waitstaff has been very nice.

This time I think I might have gotten the same dish as last time. A vegetable masala curry. The sauce was amazing and the vegetables very fresh. it was quite filling. For dessert we got lemon and fig tarts. I wasn’t in the mood for fig, but the lemon was delicious.

Eating our way through the 2nd arrondissement

I had two things I wanted to get: a Paris Starbucks mug (which I got on our first day) and nonnettes au miel. Last year I randomly bought a package, needing a gift for my parents, and they turned out to be amazing. The ones I got were orange flavored, and that combined with the gingery, delicate cake made me want more. The thing is they’re so French you can’t even get them off Amazon.

I thought during my walks I’d discover some little shop with my beloved nonnettes. No such luck. I didn’t think we’d ever find the original store, but of course my friend had noted the name during our last visit. It’s actually a wine and liquor shop with a limited selection of foods. They didn’t have any nonnettes unfortunately, but I picked up some hazelnut and chocolate wafers.

The block was full of little food and beverage stores. While my friend paid for his purchases (all sorts of interesting flavors of tonic waters), I popped into a coffee shop next door — and guess what, they had the nonnettes! I bought two packages, one for my parents and one for myself, along with a pound of Cuban coffee.

For lunch we at at Kapunka, a Thai place. I had a beef curry dish. While the sauce was really good, the meat was a bit tough. Probably should have gone with the chicken.

After that it was dessert at L’Eclair de Genie, which we had seen earlier.

They were smaller than eclairs in America — in other words, the perfect size. I got a super-chocolately one, and it was super-good.

After a bit more walking around, we popped into this cookie shop, Jean Hwang Carrant Simply Extraordinary Cookies. And guess what, Jean Hwang was there and she turned out to be a Chinese American from Kansas! We had a nice little chat with her. I got the last of their best-seller, black sesame, which was very subtly sweet, just the way I like it.

The one Saturday I was there, we had the chance to go with my friend’s friend to this place called Grand Train.

Grand Train is a former railway station with a variety food and drink kiosks and counters. It’s also a place where people, including families with little kids, hang out, talk, and, because this is France, smoke.

It’s very popular and there was a huge line when we got there. Luckily my friend’s friend was already there so we didn’t have to wait long. I didn’t try any food although we did get a bottle of white wine. It was sweet, the way I like it, and I drank too much too quickly. While tipsy, I felt perfectly fine — that is until we were standing in line for my friend’s pizza. Suddenly I felt, let’s just say, unwell. But with some deep breathing and a fruity lozenge, I was okay.

Next up: random sights!

What’s a trip to Paris without a lot of museums? This year I revisited two favorites, and checked out a few new ones.

I had read online that the Musée Jacquemart-André is a lot like the Frick here in New York, and that it was: a beautiful former home filled with eclectic art. The only thing missing was an indoor garden.

One painting that caught my eye was “Saint Georges and the Dragon” by Paolo Uccello.

Something new I learned was that Christians took the legend of dragons from the Chinese “to symbolise the deliverance of the church, oppressed by Paganism.” In other words, slaying dragons was about slaying Paganism.

Last year I really enjoyed the Louis Vuitton Foundation so I thought I’d have the same experience with the Cartier Foundation. Not so, I’m afraid. It’s quite small, and all there was when I went was an animal sounds exhibit. Maybe good for kids, but it didn’t interest me. The nicest thing is their outdoor space with lots of trees and plants.

The Musee D’Orsay is our favorite museum so of course we had to visit it again. For some reason this time there was zero line. We couldn’t believe it. And it wasn’t too crowded.

Then we realized that might have been because one whole wing was closed. But there was still a lot to see. I got my art nouveau fix, and for the first time we went out to the roof.

My friend’s photo turned out way better than any of mine.

Another day we checked out Musée de l’Orangerie, my second time, my friend’s first. It’s very small but I love it. And if you like impressionist art, you’ll love it too.

This was a first-time visit for the both of us to Les Arts Decoratifs, mainly to see the Barbie exhibit.

It was fun although some of the displays weren’t well-lit. Plus it was really warm. We noticed that about a couple of museums. I’m used to the ones in New York that are freezing.

The exhibit traced the history of Barbie, which has had many variations. Here’s the French Barbie, in honor of our trip:

At first I didn’t know what to make of this contemporary art space. The upper floors had some kooky stuff.

Plus it was too warm AGAIN. Then my friend pointed out their more interesting collection on the bottom floors. That stuff reminded me of the Whitney. Unfortunately I was a bit lazy about taking pictures. But my friend took some great photos and videos.

Next up, my second favorite thing about traveling: food.

Paris 2016: Getting there and where we stayed 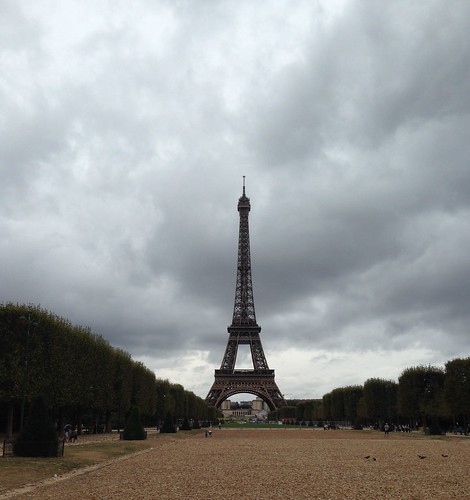 Like last year, I ended the summer with a visit to the City of Lights.

Unlike other trips, my travel buddy and I were flying out together. He had already upgraded to “comfort zone,” and when I checked in, I decided to too since it was a red eye and just $90. It was totally worth it. More leg room, lots of free movies, and, coincidentally, the same row as my bud with no one in the middle. Score!

As is my M.O. I couldn’t really sleep.  Instead I watched Mad Max: Fury Road, which was awesome but for some reason on a higher speed so that the action scenes looked cartoonish, and Spotlight, which I’ll have to watch again since I kept falling asleep.

We landed at about 8:30 in the morning. It took forever to get through customs. In front of us was this batshit lady. I had noticed her at JFK: maybe in her 70s, tons of plastic surgery, too-tight clothes. She kept commenting randomly to people, “This is ridiculous!” Her speech was quite slurred. I don’t know if she had a neurological disorder or was on a lot of drugs, or both. Either way, I tried my damndest to avoid eye contact, and was relieved when she cut into another line.

To get the apartment, we took the RER to the subway. The RER is never speedy, but this time it was ridiculously slow. Apparently there was some “incident.” We were supposed to pick up the keys by noon and were worried that we wouldn’t make it. Luckily we did, with 30 minutes to spare.

As with past trips, my very enterprising friend had arranged a (free) apartment swap. This year we stayed  in the 14th arrondissement, close to Parc Montsouris. The apartment was just lovely. The bedroom and living room each had a door, and the kitchen and bathroom were off a hallway so no going through the living room to get to either. So that meant lots of privacy for both of us.

Next up, what else? Museums!