Had a great, activity-filled weekend with ES

Friday was freezing cold, but I walked home, needing to stop along the way for a variety of groceries. At my apartment, I cleaned, ate dinner, watched TV, and read, waiting for ES to arrive, which she did after 11:30.

The poor girl had to wait an hour to even get on a bus to a New York, and then there was all the weekend traffic. By the time we got her settled in and chatted a bit, it was after 1. Time to sleep!

The next morning I thought I’d wake up naturally around 8, but I was basically comatose till after 9. We were up because we wanted to get to the Whitney before 11, picking up SB along the way. It’s the last weekend of the Picasso and American Art exhibit, and I was imagining a very long line.

It wasn’t bad. I’ve been by at times that the line goes down the block. Plus the fact that I had my corporate ID meant the shorter line.

No matter what I love museums, but it’s much more fun to go with friends, and being there with ES and SB reminded me of traveling, the same feeling I had going through the Rijksmuseum in Amsterdam, the Musee D’Orsay in Paris, the House of the Black Madonna in Prague.

I love that feeling of peace while I look at a painting, listening to the history and inspiration behind it on an audio tour, knowing my friends are nearby. And usually I’m jazzed on coffee because we almost always eat before walking around, a tradition.

This time we ate afterwards, at Sarabeth’s downstairs. Like last time, I had the lox and cream cheese omelet. So frigging good. The mocha and scone weren’t half bad either.

Next we headed downtown. We walked all over, stopping in the Peanut Butter & Company, where we split an Elvis – a deep-fried peanut butter, banana, and bacon sandwich, which would have better with more bacon – and another mocha for me, which turned out to be one too many. Couldn’t finish it. Also picked up a jar of Dark Chocolate Peanut Butter. Yum!

We also stopped in my personal favorite chocolate spot, Jacques Torres, excellent timing as I had just run out of my Wicked Hot Chocolate. We chilled there a bit as well but didn’t ingest anything as we were all so full we couldn’t imagine eating ever again.

That is until we made our way back to the east side and Village Yokocho, a real Japanese place run by Japanese, not Chinese, people. Something about it seemed very authentic to us. The food wasn’t the run of the mill rolls and udons and teriyakis, but weird things like various Japanese pickles. . . 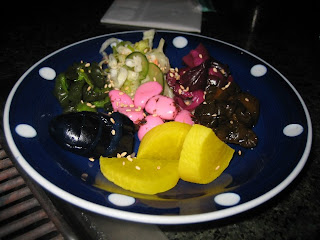 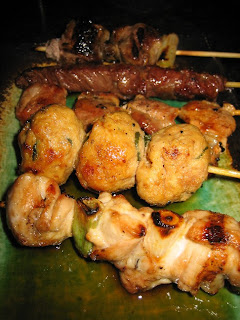 okonomiyaki, which ES and I had in Japan and loved. 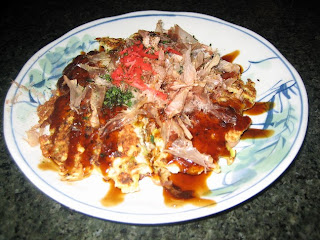 Being in Village Yokocho made me wistful for Tokyo. I find myself missing the city though I was there for barely a week.

After dinner we headed home and got back pretty early, before 9:30. We agreed to have a lesiurely Sunday. “Don’t call me,” SB said as she headed to her place. “I’ll call you.” Had a relaxing night in, both of us exhausted, though in a good way.

This morning we had a late breakfast at Sable’s, then walked down to Dylan’s Candy Bar. I’ve been there before, and to me it’s not that different any other candy place. Then we walked back uptown, stopping in Molton Brown, Aveda, and Sephora. I got some lovely Molton Brown Warming Eucalyptos shower gel and body scrub. It smells HEAVENLY.

ES left around 5. How quickly my apartment feels quiet and empty. The busyness of everyday life will fill it again soon.

This entry was posted on Sunday, January 28th, 2007 at 5:01 pm and is filed under food, friends, weekends. You can follow any comments to this entry through the RSS 2.0 feed. Both comments and pings are currently closed.