While last year I went out of town, this holiday season out-of-towners came to me, which meant I got to see some New York sights I’d never seen before, and a few I hadn’t visited in a while. 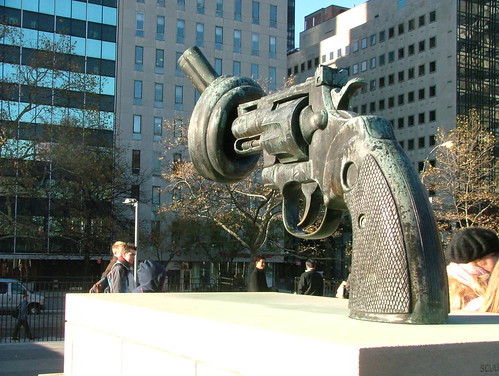 I worked near the United Nations for 10 years but never went inside. Last week was my first time. My friend Motoko from Tokyo and her son wanted a tour, and Ellen, my buddy in Boston, was kind enough to arrange it and to, of course, join in on the fun.

You have to go through quite a bit of security before getting inside. No wonder they ask you to get there an hour before your tour time. You check in at one location, wait in line at the main location, then put your stuff through metal detectors and go through a full body scan, just like at the airport. It was so similar, some people were about to take their shoes off.

Once you get inside, it’s worth it. The lobby is beautiful. Unfortunately I didn’t take any pictures. That’s what I get for not having much memory on my phone.

The tour was interesting, but because I was sleep deprived, I didn’t retain much of it. What I do remember was the guide was credentialed up the wazoo. She spoke three languages (English, Japanese, and Spanish), had a master’s degree in international relations, and was fluent in English despite having come from Japan just two years ago.

She was also nice enough to translate for Motoko’s son, although that wouldn’t have happened if Motoko hadn’t noticed her Japanese name, or if Ellen hadn’t asked her to translate in the first place.

I’ve been to the Grand Central Oyster Bar a couple of times before, but it’s been several years since my last visit. 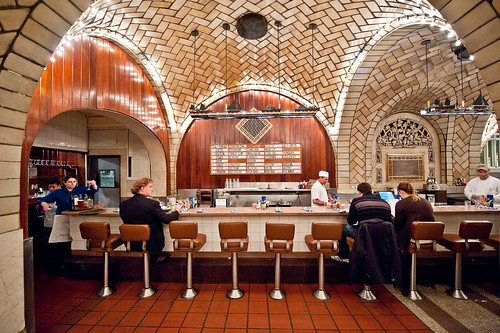 That’s not my picture of the bar although we sat at the bar.

What I love about the place is that it’s a mixed crowd. You have tourists but you also have working stiffs who want to get away from their desks for 40 minutes and enjoy some delicious clam chowder.

Which is what I had. Tasty and filling and only $7.

Of course I’ve been to the Met a hundred times, but what I’d never seen before was a line that long. How long? It went out the door, down the stairs, and onto the sidewalk. It was a perfect storm of the early afternoon, the holidays and a chilly, steady rain.

Little do the hoi polloi know, there’s a semi-secret side entrance which is a million times less crowded. Another friend showed it to me and Ellen long ago, and it’s the only entrance I’ve used ever since.

Still, that didn’t keep the rest of the museum from being mobbed, especially the Impressionist wing. Our guests lasted half a dozen Monets, Degas, and Seurats before we took refuge in the cafeteria.

A great thing about out-of-town visitors, besides the company of course, is that I end up doing things I never would have on my own. Such as dinner at Peter Luger.

If you want an old school New York experience and don’t mind spending a little dough, you’ll love Peter Luger. Perhaps its Brooklyn location has something to do with it, but I felt like everyone — the managers, the waiters, even the other diners — had walked straight out of some movie about NYC.

And the food was good too. We started with sliced tomatoes and onions, which is literally just that. What makes the dish is their sauce, similar to cocktail sauce but not tomato-y. We also got a single (massive) slab of bacon.

Unfortunately by the time our 16 ounce steaks came, I wasn’t that hungry, and could barely make a dent, although I had no problem finishing off our sides of creamed spinach and German fried potatoes, which were similar to hash browns.

It came out to about $80 per person including tax and tip, which may seem steep, but with all the leftovers and the experience itself, it was worth it.

I’ve been wanting to try this place since I moved into my neighborhood little more than a year ago. New Year’s Eve morning, I finally did, and it didn’t disappoint.

I got the Southern breakfast.

Something else I don’t usually do is go out on New Year’s Eve. To me NYE is basically SantaCon without the Santa suits. But this year I found myself out and about, and I have to admit, it was a nice change of pace.

After helping Motoko pick up some provisions for her feverish son, Ellen and I ended up spending a relaxing afternoon at Motoko’s beautiful hotel.

While we charged our phones at the bar, we each got an old fashioned.

It was very well made, and I got sufficiently tipsy. Plus the bartender was very nice and didn’t make us feel rushed.

I’d definitely return to the InterContinental Barclay bar just to have a drink and hang out.

Our relaxing afternoon came to an end when we headed out to meet our friend Aki. She and her boyfriend had a party later and were staying at a hotel for the night. Unfortunately that hotel was right near Times Square.

Getting from Midtown East to Midtown West on New Year’s Eve was like trying to climb over the Berlin Wall. But climb over it we did, mostly due to Ellen’s persistence. Like Aki said, I was about to call it a night when Ellen finally found a cop who let us through the barricades.

The hotel itself was pretty relaxing. We ended up eating discounted happy hour snacks in the lounge instead of trying to find a restaurant. The food hit the spot. Wings, pita and hummus, quesadillas, and a pizza-like flatbread.

At about 8:30 I made Ellen leave. The last thing I wanted was to be stuck in that part of town close to midnight. We walked Aki and her boyfriend partway to their party and grabbed a cab at Columbus Circle. By nine, we were in PJs and watching Orange Is the New Black, my kind of NYE. I was happy that Ellen was so accommodating.

The next day we headed back to the west side and had our first lunch of 2017. Pure Thai Cookhouse was an Aki find. It was packed but didn’t seem touristy, an excellent combination.

I got the special, a beef dish in a mildly spicy curry paste with a fried egg.

A yummy start to the new year.

Here’s hoping that every day of 2017 is as delicious.

This entry was posted on Thursday, January 5th, 2017 at 3:08 pm and is filed under food, friends, holidays, museums, new york, new york adventures. You can follow any comments to this entry through the RSS 2.0 feed. Both comments and pings are currently closed.