Thanksgiving Up and Down

Bad news first. Had a HUGE fight with my mother. I don’t even want to get into the details. Mea culpa, but it was a small thing that she let fester for weeks till finally she decided to pull a silent treatment, which of course I couldn’t leave alone, resulting in a giant, tear-inducing argument.

To tell the truth, it was a long time coming. I know I’ve been emotionally distant from my parents these last several months and that I’ve been in a selfish phase. I expected everything to come to a head, and wish it had been worked out more calmly, but we’re taking about my mother here, with her temper and stuborness, SO stubborn that she can’t even admit that she has a temper or is stubborn, a deadly combination. And my poor nice dad caught in the middle, only wanting a peaceful family get-together.

In the end we talked things through and now we understand each other better, and my mother is over her mad and happy again, but I still fell sorta crummy about the whole thing. I feel beaten down. I’ve been pushed in to the peace maker role again – aping my role when I was married – and it feels extra yucky because I realize now that’s how I was during my marriage.

But there’s no use in expressing these feelings because she refuses to listen; she thinks she’s right and that there’s a certain way to behave, and these other feelings don’t matter.

It’s been a long time since I’ve felt bad like this, and I hate her for making feel like this over such a small thing. But those feelings will pass. Once I get some time and distance. Three nights and days was way too much time to spend with them.

I remembered again what someone said, that we all marry our mothers, men and women, and for me it was true. I should have married someone like my dad who though he can be impatient and antisocial, never flips out about anything. Takes everything in stride and doesn’t get insulted by small things. He keeps an eye on the bigger picture, he knows that his children love him, and if he’s assured that we’re okay, that’s all that matters.

Onto more cheerful things. Had a blast with ES. She came in Tuesday night, first stopping at my office to check it out. Then we headed uptown and visited with SB and Ellie. ES is really good at playing with kids. She’s more energetic than I am, and little Ellie was in love.

Around 8:30 SB’s dad came to pick up Ellie for the evening, and we three went out to dinner. La Tour is a French place near me that has all you can eat mussels and frites for $18, which is what I should have gotten. Instead I opted for the French sheperd’s pie, which was like regular sheperd’s pie minus the deep dish as well as the flavor, though it was probably supposed to have that. ES got the steak tartare, which she said wasn’t very good either. SB’s mussels were delish.

Wednesday morning ES went to meet her mother and get tickets for an afternoon show. I worked out, then met ES, her mom, their cousin, and SB for lunch at Ruby Foo’s. Unlike the night before, the food was really good. I got the pad thai, which usually isn’t filling enough for me, but this one was chock full of shrimp, chicken, tofu, soybeans, and other veggies.

While ES, her mom, and cousin went to see The Color Purple, which I’ve already seen, SB and I headed to Macy’s. However, after walking five very crowded blocks, I decided I couldn’t take it. I hung out at home instead, surfing the net and packing my stuff for the weekend.

After the show ES came back uptown, and she, SB, SB’s husband, and I went out to dinner. Italian this time. Then ES and I had a quiet night in, watching the end of the Madonna concert (that woman is in shape, to say the least) and Top Chef, which was fun to watch with another fan.

Thursday morning we were up early to go to the parade. The weather was HORRIBLE. Cold and rainy. My hands were numb by the end. First we waited for the bus. Waited and waited and waited. Finally, we just walked it, which didn’t take too long, but of course it’d have been better if the weather were nicer.

We couldn’t get too close to the parade itself. You had to have special tickets to sit on the bleachers, which were on the east side of Central Park West. To get the the west side of the street would have meant going all the way down the 42nd Street and taking the S train, and coming back up. Ridiculous! But from where we were, we could see well enough. 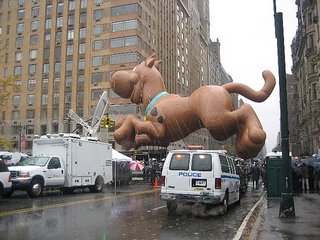 This poor dog embodies how I felt during the parade: 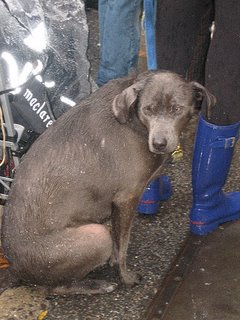 We stayed for just half an hour, though it felt much longer. Trudged our way back to my apartment, then vegged for a good hour, watching the rest of the parade on TV.

The train out to New Jersey was cuh-RAY-zy. We got there just as our train arrived so I decided to bite the bullet and pay the surcharge onboard, but it was so crowded, the conductors never even collected our tickets.

For Thanksgiving dinner my parents and I had Mongolian hotpot, as opposed to turkey and such. 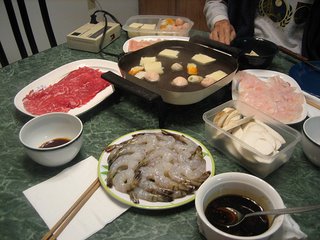 A warm and hearty meal.

Friday we hit the mall in the afternoon, and after that is when my mother and I had our fight. Fast forward to that night after we made up. I do have to say she reached out to me first, which pre-divorce she’d have NEVER done. So that’s a step forward.

Saturday I saw ES again, the only reason I stayed for so long. Otherwise I’d have left Saturday afternoon. While Thursday was rainy and horrible, the rest of the weekend was gorgeous. ES and I walked around Princeton, which is decked out now for Christmas. Then we met our from AY for dinner at this new place, the Witherspoon Grill. So good. I had the lobster pot pie. Yum!

It was pretty early when we finished, maybe 8:30, and so we got dessert at the Bent Spoon, a new and very popular “organic, artisan ice cream” place, which I think is just a fancy way of saying gelato.

ES got the sour cream and dark chocolate sorbet. Big thumb up from me. I got the vanilla, which was very good standard vanilla, and AY got the egg nog and bourbon, which both seemed full of booze.

Got back to my place yesterday afternoon. Another upside to the weekend is that now I’m ahead for NaNoWriMo. I’m currently at 46,468, which leaves 3,532 to spread out over the next four days, today included. Very doable.

This morning I was actually happy to be back at work, or at least socializing with people who are not my parents. My upcoming vacation in early December involves seeing a lot of family, including my mother who will also be in L.A., and I’m dreading it now as a result of this weekend.

But it’s just once a year, so I’ll just suck it up and be a good kid. Besides, the bulk of the time will be just me and my brother and that’s always chill.

This entry was posted on Monday, November 27th, 2006 at 10:43 am and is filed under family, food, holidays, nanowrimo, weekends. You can follow any comments to this entry through the RSS 2.0 feed. Both comments and pings are currently closed.