The “weekend thus far” post was turning into one of Moby Dick-proportions, so I’m dividing into parts. First up, Friday.

~ ~ ~
Friday night I volunteered for the Small Press Center’s indie press book fair, which started on Saturday. My work consisted of making signage, straightening the books on the first floor (the Small Press Center is in something like a library), helping to string Christmas lights in the “cafe,” and collating handouts. Back to my secretary days.

The signage was made up of three almost letter-sized agenda pages and a large poster board. I saw one of the other volunteers using colored paper to mat the agenda pages and thought that was a cool idea. “I’m totally copying you,” I told her.

My design was simple. Three staggered agenda pages and two colored pages behind them at acute angles. Her design was more complex. The agenda pages didn’t fit exactly onto the poster board and so she got out the scissors and used the paper cutter. The thought of this made me feel tired so I just overlapped the pages. Then she matted each individual agenda page with a variety of colors. I didn’t see her finished product so I’ve no idea how they turned out.

As I worked on the floor, people passing by kept stopping to say, “Wow, that looks great! Those are beautiful!” Later one of the women who was also helping to string the Christmas lights said, “Did you do the signs? They’re beautiful this year!” Good lord, what did they look like last year? Then, one of the gals running the show came up to me and said, “Are you the artist? We need to make arrows.” It was pretty funny to me.

I’ve never thought of myself as having a good eye. When I was a kid, I was skilled at reproducing pictures by hand, but not good at creating visually from scratch. I’ve always thought of myself as visually challenged. I have a horrible sense of direction; all roads and streets look the same to me unless I’ve traveled over them a million times. I can’t remember where conference rooms or people’s offices are outside of my floor.

Spatially in a small area I’m good. I know where exactly where stuff is in my place, my parents’ house, my office.

Maybe having a good eye is a skill that can be developed. I got into a conversation with one of the volunteers about hard work vs talent in terms of writing. You can have all the talent in the world, but if you don’t have the drive and tenacity, who cares? My teacher said the same thing, that most newspaper and magazine editors would take the less talented hard worker over the more talented diva, or divo, as the case may be.

Most of the other volunteers, with the exception of the woman also doing signage, seemed to have had worked for the Small Press Center before, either full time or freelance. The woman I talked to the most had done some PR work for them, was a freelance journalist for several years in the midwest, Pennsylvania, and now here, and just got a job with an academic publisher. It was cool to talk to someone so experienced in journalism, though a different kind than I’m interested in.

Another woman there was the literary agent I met with at the writers’ conference in April. I don’t think she recognized me, and I didn’t say anything. I had sent her a couple of things, at her request, and never heard back from her. Okay, not interested.

The writing world is so small. Another employee for the SPC said I looked familiar though I didn’t recognize her.

I worked from about 5:30 till after 8. They brought in pizza for dinner, which was cool. As I left, the director of the center thanked me a million times for “giving up my Friday night.” I felt like a loser for a millisecond, then let it go.

I walked several blocks north to the next subway stop. It had just stopped raining so the city had that shiny, clean look. All the holiday lights are up now and I couldn’t resist taking some pictures: 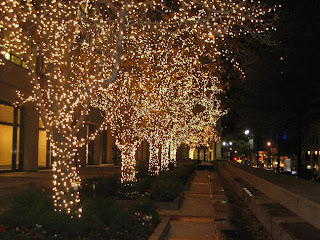 With all the stopping and taking photos, I didn’t get home till almost 10. Then I became very interested in TV, including a rerun of House at 11 (the diagnosis always seems to be either a weird fungus or a genetic disease, or a combination of both) so I didn’t go to sleep till midnight.

This entry was posted on Sunday, December 3rd, 2006 at 7:56 am and is filed under awareness, TV, weekends, writing. You can follow any comments to this entry through the RSS 2.0 feed. Both comments and pings are currently closed.