Rumble on the Lower East Side

Last night I was on my way to MB’s from class, minding my own beeswax, when a couple of stops before his, these three little teeny boppers got on.

I have no idea how old they were. Coulda been 16, couldba been 21. Either way all three, two girls and a guy, were wearing those obnoxious skinny hipster jeans, while both girls had giant Marc Jacobs bags.

So I already hated them, and even more so when one of the girls pulled a frigging flask out of said Marc Jacobs bag. What is this, 1929?

Then flask girl asked the other girl, “Is this just like Chicago?” to which Chicago girl answered, “Oh yeah, this train is definitely like Chicago,” then pointed at random things, saying how they were like Chicago.

Then the next thing I knew, she was pointing AT ME and saying, “Well except for her. . .” then mumbled something and snickered.

Are you fucking kidding me?

In the past I might have just looked away and not said anything. Or if I were sitting next to someone, we might have exchanged incredulous glances, and that would have been the end of it. But I wasn’t next to someone. I was by myself and not in the mood to take shit from some little pissant.

So I started staring at her. I stared and stared, and she got all squirmy and uncomfortable. Then I stared at the other two, who wouldn’t even catch my eye. For the rest of the train ride, I’d look away, then stare at that girl again.

When it was time for me to get off, I stood and kept looking at her with a quizzical expression. At that point, she tried to smile at me and make nice, but I just kept staring. Finally I turned to get ready to get off the train, and I heard them snickering again and making comments.

Is this frigging junior high or what?

I got off the train but was so pissed off, I went back, and standing in the open doorway, gave Chicago girl the finger and told her to fuck off. Her reaction was priceless: 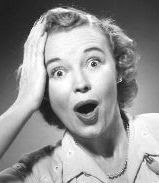 Ah, the trials and tribulations of riding the subway.

In other news, there’s been a big shake up here at work. My team, which had 10 people, now has 5. Five, as of Monday, have new jobs and report to a new boss, the lucky stiffs. We all found this out yesterday.

You’d think the five who are moving over would be dancing in the streets, but they are pretty shocked and feel bad about those of left behind with our awful, micromanaging boss. Also, they don’t really know what their new jobs look like.

I’m glad for the shake up. Things couldn’t have continued as they were. My boss’ vision was muddled and unmanageable. Yes, my workload will increase for some time, but whatever. I’ve been through so many changes with this team. The others feel bad though, I think. Although the way the five were picked was sort of random, those left behind feel overlooked I think.

This entry was posted on Friday, February 29th, 2008 at 8:36 am and is filed under rant and/or rave, work. You can follow any comments to this entry through the RSS 2.0 feed. Both comments and pings are currently closed.