A too much drinking kind of weekend

At least for someone who normally doesn’t drink a lot.

One Fish, Two Fish – Maybe No Fish
Friday I had a lovely day off. There’s something about not being at work while the rest of the world is. I kept my Blackberry on but that wasn’t too bad, just half a dozen emails or so. Lots more writing and drinking of caffeinated beverages, this time at a Starbuck’s near me – hate the coffee, love the breakfast sandwiches – and then downtown at a boba tea place, mine without boba.

I also stopped in the Strand, like I’ve been meaning to for ages. Got The Wind-Up Bird Chronicle by Haruki Murakami, and Everything Is Illuminated by Jonathan Safran Foer.

Hung out with SB and Ellie. Ellie had on yet another hilarious outfit: a kitty cat shirt, no pants (diaper only), and a bright orange swimming cap halfway off her head. She kept trying to get me to read to her. I lasted one book, One Fish, Two Fish, Red Fish, Blue Fish, before getting bored. “Once upon a time,” I kept saying. “The end!” which she thought was hilarious.

Next we walked down to the Japanese grocery store. Apparently I’m now allergic to seafood. Tuesday night I broke out in hives. I didn’t know what it was from. Peanuts? The chocolate and pecan candy I had? Well, I broke out again on Friday shortly after ingesting a salmon and roe rice cake. I didn’t know how bad it was going to be, so just in case I popped a Benadryl.

Bad idea. My brother and his girlfriend, in from L.A., came into the city around 5. I was a space cadet for a good part of the night, though I had a nice time with them. First we went downtown to see an art show that my brother’s friend’s gallery was having. Then we all went out to dinner at this Meditarranean place, and afterwards went, of all things, bar hopping.

Despite the Benadryl, I did have some drinks. A few sips of champagne at the art show, a tiny bit of wine at dinner, and then two vodka tonics. By the time I hit the vodka tonics, the Benadryl was was wearing off, or else I’d have been on the floor.

“I shouldn’t have had the Seven and Seven.”
The next morning my brother was very hungover. His girlfriend, E., and I were feeling it a little, but not like D. , who had us beat with drink quantities (9 to our far-less-than-9). He puked, then slept it off while E. and I got some breakfast across the street.

We did eventually make it out of the house. What was up with the weather this weekend? The whole time we were fuh-REE-zing, when earlier in the week it was like summer.

We took the bus to the Central Park Conservatory Garden, which I didn’t even know existed. It was absolutely lovely. 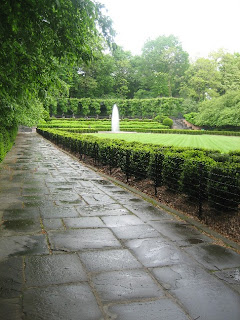 E. graduated from the same college I did, so she wanted to check it out, having not seen it for some time. We walked across the Park, and first hit the Hungarian Pastry Shop, which I haven’t been to in years. 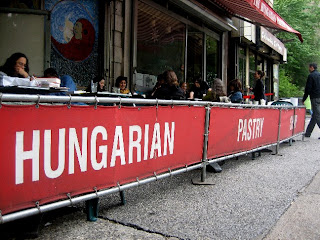 It seemed newer and nicer than when I used to hang out there. I distinctly remember the tables being marked up, and even being encouraged to write on them. But maybe I’m thinking of someplace else.

Then we stopped in St. John’s the Divine. Beautiful and peaceful. At one point I was alone, no footsteps or voices in earshot, and it was so utterly still. Is that God? The energy of the universe encapsulated? That inexplicable, intangible Something? 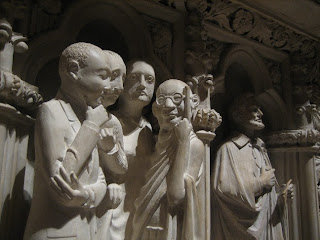 Anyway. After that we walked around both campuses. They had just had commencement so the tents were still set up. It brought back a flood of memories for E. I’ve been back to campus reguarly since 2004 so it wasn’t that big of a deal for me, though three years ago, I was like, “Oh my God! I used to have lunch there! That’s where my Chinese class was! I can’t believe they have an Asian market now!”

We stopped in the campus store, where I got two books for super cheap, hardcovers of The Lovely Bones for $6, and A Room of One’s Own, which I somehow have never read, for $7.

Yes, that’s safe for when the bus comes to sudden stops or lurches around traffic. When they finally got off the bus, they just let the kids run off ahead of them out of a different exit, right out into the street. The whole time they were on, E. and I were silent, but the moment they got off, we were like, “Oh my God! Can you believe they, etc., etc.”

Is that a rabbit in your pocket, or are just happy to see me?
We sat around my apartment watching more of The Heroes marathon on the SciFi channel before heading out to Brooklyn to meet a couple of E.’s friends from college. On the subway ride down, there was a little boy who was crying sort of weakly. Maybe because he was tired or sick. The mom was calm and practical, getting them settled while also comforting him.

The woman next to me, who had dyed purple hair, had an open bag. The guy next to her kept looking down in it, which made me think she had a dog or cat in there, but then – voila! – it was a bunny.

A big brown rabbit. The little boy saw at the same time, and the random guy beckoned at him and helped him across the train so that he could pet it a little. He did, very seriously, and then went back to his mom.

When those kinds of things happen, it makes me never want to leave this city.

It was cool to see a different part of New York, though I doubt if I’d ever move out to Brooklyn. It seems so far away. We had dinner at this great Italian place and then went to this bar. E.’s friends were very nice. The husband of one was hilarious. Still, I started to poop out around 11:30. I had had a glass of wine at dinner, and part of a gin and tonic, which I spilled.

Spilling drinks was the theme this weekend, first E. knocked over a bottle of water at my apartment, which was almost impossible NOT to do, since my place is so tiny, then D.’s Diet Coke at lunch, and then I knocked over my gin and tonic. Oh yeah! And Thursday morning I spilled coffee all over my living room rug. Maybe it’s something in the stars.

I was sad to sa
y goodbye to D. and E., but then remembered we’ll all see each other again next month when I’m in L.A. and we drive out to Vegas for the weekend. (Vegas, baby!)

Today I was a complete bum. I wrote a smidgen this morning, then indulged myself with the Sunday Times and a couple of episodes of the Gilmore Girls on DVD. Because I was in touch with work via email on Friday, I don’t feel too much dread about tomorrow. Plus my annoying new boss will be out on Monday and Tuesday, woohoo!

BookExpo. I’m so psyched! I think I’ve let go of the idea that I don’t like networking and am bad at it. What I like is listening to people’s ideas and hearing what they’ve done with their work and careers, and chatting with people who have similar interests.

I guess that’s a kind of like networking without being overly aggressive or salesy. It’s just something I enjoy and am getting more comfortable with the more of these kind of events I go to.

This morning it occurred to me that writing is like my child. I have to nurture it, educate it, give it attention. I also have to make sacrifices for its good, like having a job I don’t love but that pays the bills.

Of course I’m looking for something better, but I don’t think I could take a pay cut, not if I want to keep living where I’m living, going to writing conferences and events and taking classes. Not to mention traveling and gaining experiences that way. Having some money definitely makes things easier. And it’s not like I work more than 5 days a week, only occasionally past 5 or 6. It’s more the personalities in play that I don’t enjoy.

As Virginia Woolf says, “A woman must have money and a room of her own if she is to write fiction.”

Having a day job isn’t just feeding the writing habit but helping it grow. It nurtures something that while at times makes me frustrated, also brings me a lot of joy and satisfaction. I’m not in it for the big bucks, that’s for sure.

This entry was posted on Sunday, May 20th, 2007 at 1:35 pm and is filed under family, weekends, work, writing. You can follow any comments to this entry through the RSS 2.0 feed. Both comments and pings are currently closed.