A Pinkberry kind of weekend

Friday night was PL’s lit mag’s monthly reading, for which I was about 15 minutes late. I had gotten home from work around 4 and then had a really hard time getting myself together. I called PL around 6 to let her know I’d probably be late.

“So you have pants on at least,” she said.

At the bar I got a drink for a change – a gin and tonic – and drank half really quickly so that I was totall bumping into furniture when we left (so I’m a lightweight). Then we had dinner at our usual place, Paladar. We were seated in the front for the first time and it was LOUD. We couldn’t hear each other without screaming ourselves hoarse, but the tables on either side of us were for some reason ear-bleedingly noisy.

For dessert we went to Pinkberry, which is apparently all the rage. It’s nonfat frozen yogurt, original or green tea, with an assortment of toppings. It’s more sorbet than fro-yo, and has a tangy flavor. I like it.

And so does everyone else cuz there was a line out the door Friday night, like we were waiting to get into some chichi club.

Saturday I wrote and then hit MoMA. I was there over Memorial Day weekend but somehow missed the Richard Serra exhibit. We weren’t allowed to take pictures but I managed to sneak one in. 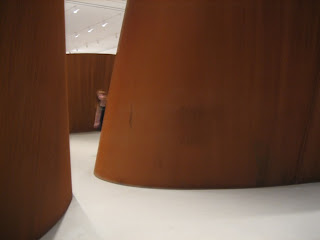 I know it’s blurry but I still like it, especially how the girl’s red hair matches the sculpture. Totally by mistake.

Sunday I had to leave at noon to meet up with PL again for a literary journal festival at Housing Works. My morning was very productive, writing and going for a run. PL and I talked about how if we have the whole day, we both just piss the time away and get maybe an hour’s worth of writing done. But if we have a limited time, we’re very productive.

The festival was fun though crowded. Journals which usually go for $10 or more were being sold for $2. I picked up three. Afterwards we had a very late lunch at Noho Star. Yummy burger. Then Pinkberry again for dessert! That PL is crazy for Pinkberry. And again, a line down the frigging sidewalk.
I was tired last night but had trouble sleeping. I started to drift away around 11, but then a car alarm went off. It stopped after just a few minutes, but I was wide awake till after midnight, then kept waking up.
I’m sorta grouchy today. Can’t wait for my vacation tomorrow. I’ll be gone a full week in L.A. and Las Vegas, but I’ll probably bring my computer with me.

This entry was posted on Monday, June 11th, 2007 at 7:19 am and is filed under weekends, writing. You can follow any comments to this entry through the RSS 2.0 feed. Both comments and pings are currently closed.